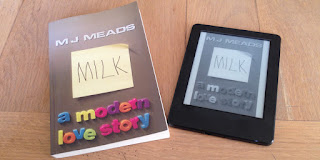 "The second his hand met the delicate and sensitive flesh at the side of my midriff I breathed in sharply, resulting in my chest expanding and my stomach flattening as though it were trying to get away from the hand.  The intake of breath was so forceful that my lungs filled and then stopped, preserving the air inside them, as though I'd forgotten the next part of the act of breathing, an act I'd been more than well enough versed at to know what came next.  Only when the hand met my skin again and rested still for a moment, did I have the courage to breath out, which I did softly, to ensure my body's contact with the hand at all times.

Just as I'd grown comfortable with Mike's hand resting on my side, his fingers began to move slightly, in the same pattern they had earlier in the evening, but without the gossamer barrier of my light summer dress.  This time it was not comfort that was to be derived from this action, my heart rate was not instructed to decrease as it had before, it was being coerced into rising, which it did, to the point of seeming audible to my ear.  I wondered how, when I felt like my heart was going to burst from my chest at this time, I was expected to survive anything more arousing.

His fingers continued to move in small circular motions, as we both considered our next move.  By not shirking away, or swatting his hand with mine, I was consenting to his touch.  I wanted him to know his actions were warranted, but I was still nervous and lacking the confidence to say so either verbally or with my own body.  As the circles he made with his fingertips began to widen I felt a surge of confidence welling up inside me.  The moment just one of his fingers reached the halfway point of my side, equidistant from my hip and shoulder, I involuntarily turned my head to face him and tilted slightly at the waist to bring my lips towards him.  I didn't know where my lips would impact, I didn't care, all I knew was I needed to kiss him now."

Check out 'Milk: A Modern Love Story' on Amazon using the links below. Why not take a free 'Look Inside' at the first few chapters. Kindle Unlimited users can download and read for free.