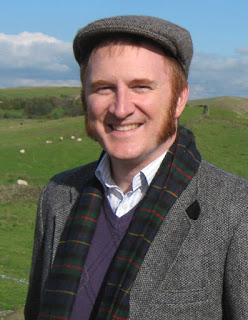 This week's interview is with Lennox Brown, author of The Small Matter of the Death Cult of Katahdin (The Shabby Realm Book 1).

Lennox lives in the sunny south of Spain now having spent time in Hollywood, so I grill him on life in LA and whether the British sense of humour fits in over there. Or the spelling of humour for that matter!


When did you first realise you could write and at what point during the writing of your first book did you realise that you in fact couldn’t?!

Nice question! I knew from an early age that creative writing was my thing. I remember sitting in English classes in school and loving it, I couldn't understand why everyone else around me found it such a chore. I was given an assignment once where I was to write the next few chapters of Dickens' Great Expectations, after the book ends, and I really went to town trying to match Dickens' style, plot, and pacing. It was a huge amount of fun and I got a big juicy gold star for it. That was my first inkling that I was "different", "a writer", and "destined to be social kryptonite".

Tell us about your career in LA, were you screenwriting or involved in other roles within the film industry?

As with many writers, my invincible ego told me to follow the path of my heroes at the time like William S. Burroughs, David Lynch, and Werner Herzog and move to LA to make artsy films that would really say something profound about life and make me a star in the art world because to a nineteen-year-old ego like mine, how could that possibly go wrong? Fifteen years later, I had a variety of short and feature length films under my belt and had worked as a screenwriter, director, producer, cinematographer, you name it. I learned two important lessons from all that. 1. I suck at making films and 2. I especially suck at making art films. My last directing project took me almost three years and is a homage to all my poetic, ethereal influences. The final product is an unwatchable mess of slow dissolves, plinky Buddhist-bell music, and artistic megalomania that wiped me out financially and creatively. It was then I decided to leave LA and the filmmaking world and go back to my first love - writing.  Life's been a lot more fun ever since.

What made you move away from that creative mecca to sunny Spain?

Once I decided to leave LA (I personally wouldn't call it a "creative mecca". I would describe it more as a "cesspit of narciccism and youth worship that discourages actual creativity with a soul-crushing vengeance". But you know, potato pot-ah-to) I realised I hadn't been living much of an actual life. The culture there places a lot of importance on working hard to follow your dreams and very little on enjoying life along the way. In fact most people there have no time for such frivolities as they are busy getting new headshots, working on that next script that is saved on their laptops as 'Untitled Oscar Gold', or practicing for that audition they just booked as Yet Another Screaming Victim for 'Saw 27: Now It's Just Silly'. So these past six years I've been making up for lost time and have become a bit of a nomad. I've bounced around between London, New York, Manchester, Phoenix, and now the south of Spain. In that time I made a lot of new non-Hollywood friends that restored my faith in humanity, as well as met my wife and had my first child. Coming to Spain was about getting life to calm down a bit so I could start getting some writing done. 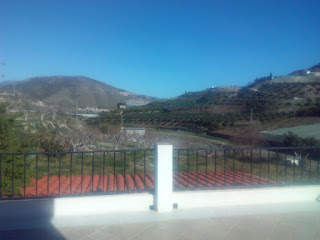 I have a young child in the house who is rocketing toward toddlerhood, so getting any work done requires three important things: a patient and understanding wife, a work space that is entirely separate to the chaos of a household with a young child, and an even more patient and understanding wife (needs mentioning twice). The house we live in at the moment is ideal because it has a spacious office built onto the roof that is only accessible from outside stairs. Plus, it gives me an incredible view over the small valley we live in. The price I pay for such a space is having to deal with the sweltering heat of the Spanish summer, but I've learned to type with sweaty fingers, so it hasn't been a problem.

Your debut novel, The Shabby Realm Book 1, is chock full of what I would call very British humour, dry and often surrealist. Is that what you prefer to read/watch/listen to yourself?

Absolutely. My wife and I have had long discussions of this because although she is British, she much prefers the optimism that is the pulsating vein of American humour while I much prefer the sarcastic, bleak, and ultimately hopeless view of life that British humour provides. I've always found American humour to be a bit too reliant on shock value while British humour is more about being clever. My education in it came from long hours at mind-numbing jobs filled by listening to BBC radio comedies on their iPlayer. After a few years of this I knew all the shows, the actors, and most importantly the writers. I got to the point where I could tell which writer wrote each show just by listening to a snippet of dialogue. When it came time to write my own book, it seemed very natural to follow in that same style that resonated with me so deeply. That and I like using the word wanker.

Do you feel that British humour struggles for acceptance in LA?

Yes, because it stands in complete opposition to the cultural values. People come to LA because they are ambitious and have an absolute belief in their future potential. Everywhere you go you can almost smell the optimism in the air and it's why restaurants there always have cheap waiters, bars always have cheap bartenders, and why it's a city ordinance that you can't enter a gym on Sunset Blvd unless you already have well-defined abs. The culture there places a huge amount of value on the idea that your golden future is what you live your life for. But British humour is steeped in a tradition of satirising social class structure, which means it goes the other way. It uses sarcasm and cynicism because that's what resonates with the frustration and helplessness British people feel to this day about their inability to move outside of their social classes. I have a lot of complaints about LA culture, but the one thing that doesn't exist there is a sense that you can never move up the social hierarchy. Everyone completely believes they have what it takes to be the next George Clooney or Jennifer Lawrence or Steven Spielberg, so being rich and famous always feels just around the corner.

Despite the otherworldliness of the characters in The Shabby Realm, a vampire, a witch etc, they feel very human. Was it always your intention to give them intensely human characteristics and flaws?

Yes. Those are what took the majority of time, in fact. It was really hard in the beginning to figure out how I was going to balance the humour with the character development. My early drafts were far heavier on the humour and they read like a series of sketches. Later drafts went too far the other way and there were chapters and chapters of subtle character development that dragged the whole story almost to a halt. Balancing the tone is the most difficult thing about this series and always will be. But if I can pull it off and make them a bit more human than the reader is expecting, I think it will make the book much more satisfying to read. I wanted to avoid the Indiana Jones Syndrome, which is when you have really good action scenes but zero character development, leading to a very forgettable experience. I want the characters to stick around with you for a while afterward, like those people you find in your living room the morning after a party. Only with my characters there will be slightly less empty lager cans about, whiffs of vomit wafting from the bathroom, or confused tigers wandering the hall outside (I throw great parties).

Have you started working on The Shabby Realm Book 2 and when can we expect to get our hands on it?

Oh yes, I am neck deep in it at the moment. All I can tell you is that it will be set in the mythological realm of the Aboriginal Australians, who just like the Abenakis from the first book, have a rich and varied mythology that a white European invader like myself can pilfer with abandon for my own selfish uses. But if it brings an increased awareness to their folklore then I've done my job.

Finally, if you could invite 3 authors to a dinner party, living or dead, who would they be and what would you serve?

Tough one this, as I'm going to break the confines of the question a bit and invite writers who aren't necessarily authors.  I would want to bring people who I not only admire, but whose work I know well and feel I have something to learn from. All of these writers have an ability to balance their strengths with the other story elements and its this balance I want to learn more about.

The first one I would bring, after digging him up from his grave and injecting a little zombie juice, would be Bob Larbey. In BBC circles he is absolute legend and is most well known for creating a British sitcom in the 70's called The Good Life. But I would want him there for his work on the sitcom As Time Goes By starring Judie Dench and Geoffrey Palmer, which to this day is one of my favourite television programmes of all time. It was wizardry how Larbey managed to balance character development with humour and through all sixty seven episodes, he was the sole writer. The show never flagged or got stale and was funny right to the end. I have a lot to learn from him.

The second guest would be John Finnemore, who is well known on BBC Radio 4 for his work on the massively-popular radio sitcom Cabin Pressure, which starred a then-unknown Benedict Cumberbatch! Finnemore's talent lay in witty banter and in my writing I'm always striving for the kind of snappy, hilarious dialogue routines he came up with. A lot to learn from him too.

My final guest would be another zombie juicer, Mark Taverner. Taverner was also a popular author, but once again I would want him there for his radio work. He created numerous famous radio programmes, the most popular of which was called Absolute Power starring the immortal Stephen Fry and John Bird (which went on to become a television programme after Mr. Taverner's death). With this and other shows Taverner had a keen ear for subtle, layered satire that he was able to balance with character development and story, which is very difficult. 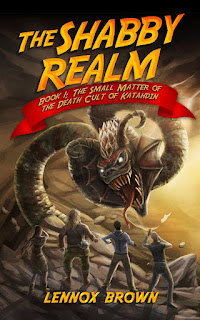 The Shabby Realm Book 1 is available now and it got a whopping 9/10 on this site click here to read the full review.
Thanks to Lennox for his time and it feels like I should thank his understanding wife too!

I for one can't wait to read the next book in the series!