Review - In The Shadow Of Death - Peter E McGinn 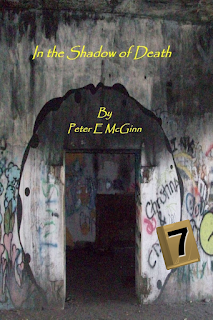 A promising concept for a book, In The Shadow Of Death tells the story of former child star Kyle, who clings onto his Hollywood dreams by occasionally pitching ideas for new TV shows at his friend and industry contact Syd. When Syd tells him that she's going to be working for a network owner owner who's launching a crime channel, Kyle jokingly comes up with a suggestion, to film a series based around a convict on death row.

The book starts briskly enough, bringing us up to speed with Kyle's former glories, his current career path of running his own lingerie store, his dreams of making it back to the big time. We're also introduced to his long suffering employee Joyce, who provides a good foil for Kyle initially. The writing is humorous, if a little crass, but the promise of the planning, development and execution of the show (no pun intended) keeps the reader engaged.

The action then moves to Texas and begins to explore the workings of the show, the recruitment of a family who's son or daughter is awaiting execution, dealing with the media outrage and various protest groups. Also at play is the individuals working on the show and their own beliefs regarding capital punishment, or the guilt of the convict they end up settling on.

Unfortunately this excellent premise is sometimes neglected in favour of long swathes of storyline concerning Kyle's love life and his sexual history. He objectifies every woman he meets, producers, camera operators, victim support officer, convict's mother, nobody's safe from his male chauvinistic gaze. It comes across a little bit creepy at times, as if it's plot relevant what every female character is wearing and how it clings to their various curves. When Kyle falls for the hardly svelte Jill it feels like he thinks he's doing her a favour.  Worse still is the book's handling of transgender issues which is insensitive at best, at worst offensive, and is a subject that deserves more than a cursory reference and a cheap gag or two.

Things pick back up towards the end, the main characters find themselves needing to work out what to fight for, the TV ratings, the will of the families of the convict or victim, or their own careers. The ending falls a little flat for my tastes and the epilogue only detracts from what could have been a memorable final scene. I really wish the book concentrated more fully on the development, production and reception of the tv programme, with Kyle's love life playing a much smaller part.

It's still an enjoyable read, well paced, a thoroughly interesting subject with some good points made about capital punishment and 'car crash television', but Kyle and his love life cast too wide a shadow and ultimately result in the death of a potentially great book.