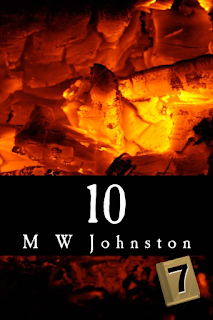 '10' is a novella concerning Eric Bell, a Premier League footballer and part-time psychotic serial killer. It's a fascinating concept and one I was only too happy to delve into and comment on. First things first I ought to mention that the book is extremely dark, with graphic depictions of ultra-violent acts so if that's not your cup of tea, in the words of James Alexander Gordon, look away now.

Things start promisingly, with aptly poetic language describing Bell's inner thoughts and outward behaviour, when describing rain as "musical and hypnotic and can wash away evidence" and his first victim - "Her eyelids were melted shut. She was beautiful." There's enough macabre imagery early on to sink your teeth into, as well as a little back story on Eric's childhood and early brushes with violence.

The book sporadically switches between Eric's life as a serial killer and his career as a professional footballer, his actions on the pitch sometimes mirroring or spawning his actions as a killer. There's also the obvious similarities between the oft narcissistic personality traits of footballers and serial killers, a link which the author exploits to good effect early on.


There's always a fine line to be trodden when covering a topic like serial killers, trying to find the balance between psychological causation and validation, between cataloguing and glorifying. Towards the middle of the story I fear it strays too far and is a little reckless in attempting to detail more horrific crimes and up the ante of brutality for little intrinsic story line value. Without closer examination of the killer's escalation into more extreme violence and sadism it becomes a somewhat hollow and empty read at times.

I think in this short form the story accomplishes enough to make it a worthwhile read, but a longer format would have given the author the chance to really analyse Eric's violent behaviour, alongside the pressures of being a top flight footballer. The ebbs and flows of a football season aren't really evident as his team seem to win most games and he scores a hatful of goals, whereas a barren spell in front of goal might have provided an interesting foil for his killing spree.

My final note is simply to say that there's an overabundance of real sporting personalities and other famous names that only serve to compromise the story for non football fans and I suspect would make a lawyer reading it nervous! There's some good quality prose here though so don't be put off by the sporting context which is universal. A fan of football and dark fiction would certainly enjoy this complex novella.