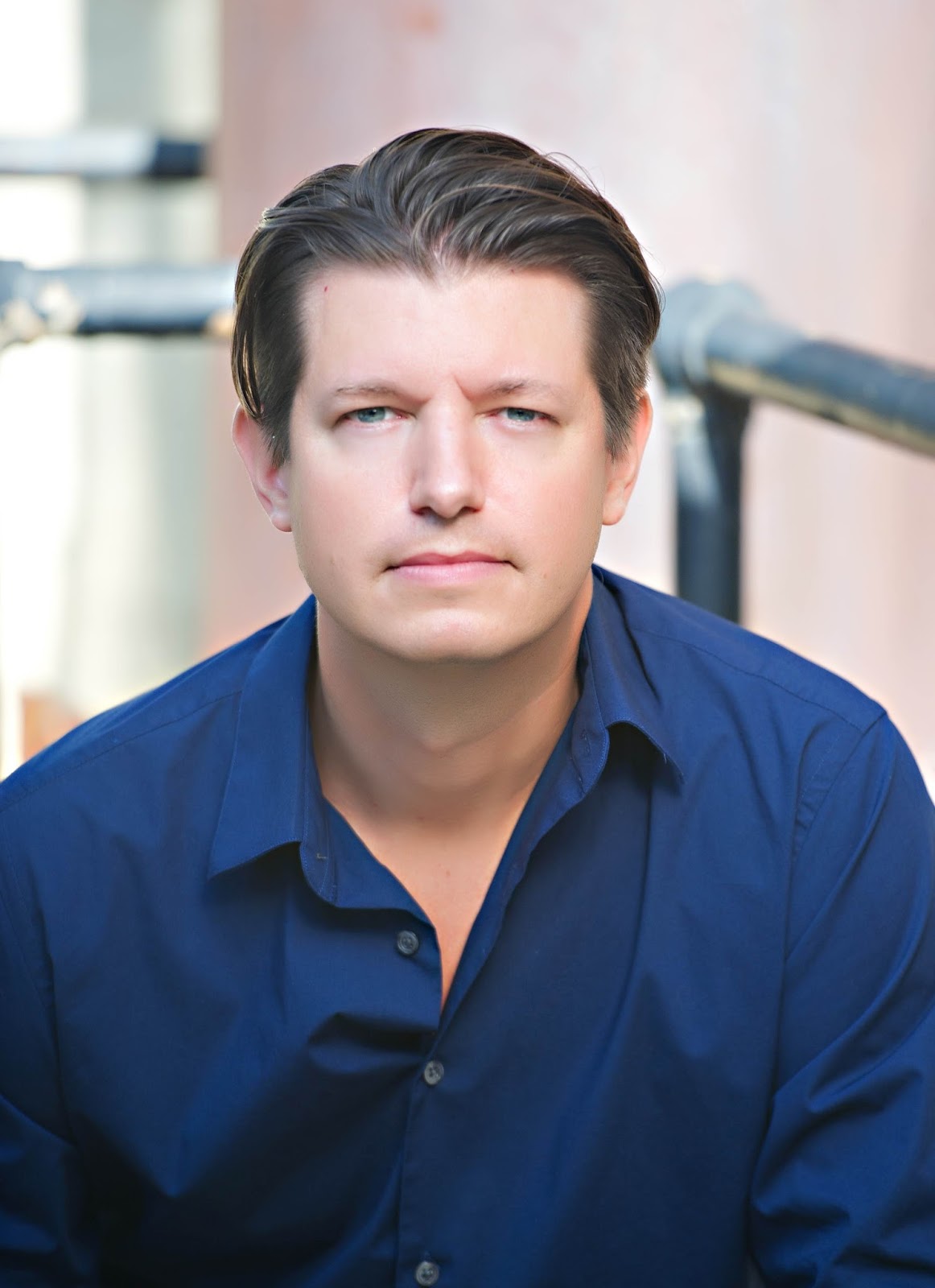 This week it's the turn of Trace Conger, author of The Shadow Broker and the recently released Scar Tissue, to answer my questions, as usual some more insightful than others!

We'll be talking crime writing, whether characters necessarily have to be good or evil, and the dark web amongst other things.

Plus we'll get a sneak preview of what's coming next in the series!
www.TraceConger.com


When did you first realise you could write and at what point during the writing of your first book did you realise that you in fact couldn't?!

I realized I could write when I penned Henry The Happy Pirate in the first grade. My mother, who was a wiz on a sewing machine, made the cover for me. She wrapped a piece of cardboard with some kick-ass black velvet fabric. Being only seven at the time, I didn't realize that I should have explored agent representation or take the time to learn the publishing landscape, so alas, Henry was never brought to market.

Flash forward thirty-plus years to my 'other' first book, The Shadow Broker. While I can't say I realized a time when I couldn't write, I was completely intimidated by the writing process for most of the time I spent writing the novel. There were several times where I wasn't sure how it was all going to come together, but by writing every day and trudging through the slow times, I completed the book in about ten months. I also learned that writing a novel is only as intimidating as you make it.

I have to check with my literary attorney, but I believe I still own the rights to Henry The Happy Pirate, so that might be my next project if I close out the Mr. Finn series. Or maybe I'll explore a crossover novel!

The Shadow Broker introduces us to a 'down on his luck', separated, unlicensed Private Investigator. What made you decide to rob him of everything prior to the beginning of the novel?

I know what you're thinking. A down on his luck PI? You can't get any more cliché than that.

I wanted to strip Finn Harding of everything that was important to him (his career, his income potential, and his family) so he had the motivation to claw his way back up. To me, Finn embodies the type of person who has nothing to lose, since he's lost so much already. And when you're dealing with someone who has nothing to lose, you're dealing with a dangerous individual. I also like to think of him as an animal that has been backed into a corner. The claws come out and he does what he has to do to survive.

You actively rally against archetypal heroes and villains in the book, particularly with Finn and Little Freddie. Do you have particular influences that reflect that style of characterisation?

The short answer is not really. There are several noir elements in the novel and it does draw inspiration from some of the hard-boiled crime novels of the past, but I can't say there were any specific influences that reflect that style of characterization. My goal in the book was to give all the characters something they're fighting for and to establish a thin line between good and evil.

Characters such as Finn and Little Freddie straddle that line throughout the book, but each believes they are doing the right thing, which is key to writing villains (or any character, really). No villain is evil for evil's sake. They truly believe what they are doing is justified.

I want readers to identify with these characters and root for them, but then turn around and root against them. I've had several readers tell me they aren't sure whether Finn is a 'good guy' or a 'bad guy', and that was partially my intent. Since he straddles that fine line, he can go either way. He's ambiguous at times, and that's one of the things I enjoy about writing the character.

The dark brokerage itself is a fascinating concept, how did you come up with it and will it make a reappearance in the rest of the series?

In the novel, the Dark Brokerage is a black market information brokerage on the deep web where users can sell or purchase stolen or otherwise compromised information, such as credit card numbers, personal identification, medical records, essentially anything you want. I based it (loosely) on the Silk Road, which, before it was shut down, was a deep web site where users could buy and sell illegal narcotics.

The title of the novel, The Shadow Broker, refers to Bishop, the operator of the Dark Brokerage. It’s interesting to note, that after the novel was published I met a woman who worked in the cyber security industry. Our conversation turned to my book and she admitted that there were real sites on the deep web that operated much the same way as the Dark Brokerage does in the novel, something I wasn't aware of while I was writing it, but something that scares the hell out of me.

I can't say for certain that the site won't reappear in the series, but it doesn't play a role in the second book, Scar Tissue.

Family plays a strong role for Finn in The Shadow Broker, is there an underlying moral quandary about doing what's best for your family, regardless of the cost?

There is. Finn is an exceptionally flawed character. He’s got the morals of a politician who moonlights as a telemarketer, but he'll do whatever he can for his family. I think that is why Finn is somewhat of an everyman. People tend to do extreme things in the name of family. That doesn't always mean that it's the right thing to do, but often a person's judgment is clouded when family is a motivating factor.

But for Finn, the traditional family no longer exists. He's separated from his wife and he's a part-time father to his daughter. Plus, he's living with his father, who was recently kicked out of a nursing home for assaulting an orderly, so he's trying to function within the boundaries of his new reality.

The lengths Finn goes for family continues as a theme in Scar Tissue. In that novel he agrees to help his ex-wife's boyfriend, an anesthesiologist, escape from a fentanyl smuggling operation.

Who or what inspired you to write in the crime thriller genre? Are you writing the books you yourself would want to read?

Joe Lansdale, Elmore Leonard, and Lee Child have all been huge influences on me. I love Lansdale's Hap and Leonard series so much that I mentioned it in the novel (Finn is an avid reader). I also like to write (and read) crime thrillers because to me, criminals are fascinating individuals.

I actually considered a career in criminology because I wanted to explore why people are capable of doing the things they do. Unfortunately, in college I preferred to drink instead of study, so clichés aside, I guess I was better suited to being a writer.

Writing crime fiction is also a great way to work out your frustrations without actually killing anyone. There is a scene in The Shadow Broker, where one character kills another with a belt sander. When I wrote that scene I imagined a variety of individuals being strapped to that chair. On paper, I can kill off anyone who has ever p****d me off (and the list is long) and still avoid lethal injection.

Are you working on the next in the Mr. Finn series now and when can we expect to get our hands on it?

The second in the series, Scar Tissue, has just been released. I’ve also begun outlining the third in the series, tentatively titled The Prison Guard's Son. That might be an exclusive, since I don't think I've mentioned the title in print elsewhere! 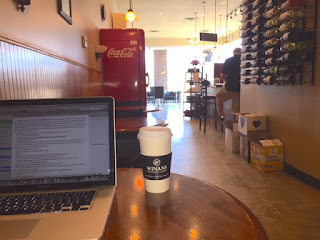 My current office looks much like the inside of a coffee shop, mainly because that's where I spend most of my time. I have an intense fear of offices (clowns and dentists don't unnerve me in the least). That's why I'd never survive in the corporate world. I can’t handle sterile cubicles, hold buttons, parking lot views, or telephones ringing around me.

I have a home office, but I tend to avoid it at all costs. I basically roam from place to place like a nomad with a laptop and work wherever I can. I consider any place that has coffee available to be a suitable working environment.

What book by another author do you wish you could have written and why? (To bask in the glory of it, to improve it, or to have never released it!)

I have two answers to this question. The first is I wish I had written the Magic Tree House series by Mary Pope Osborne. My daughter loves that series and it's awesome to see the joy she gets out of them. We've spent countless hours reading Osborne's books and I credit that series as fostering my daughter's love of reading.

The second is the novel GO SET A WATCHMAN. I wish I had written that, so I could have kept it sealed inside the safe deposit box.

Elmore Leonard, Stephen King, and Joe Lansdale. It would be potluck, so they could each bring something. I hear Stephen King makes a mean potato salad! 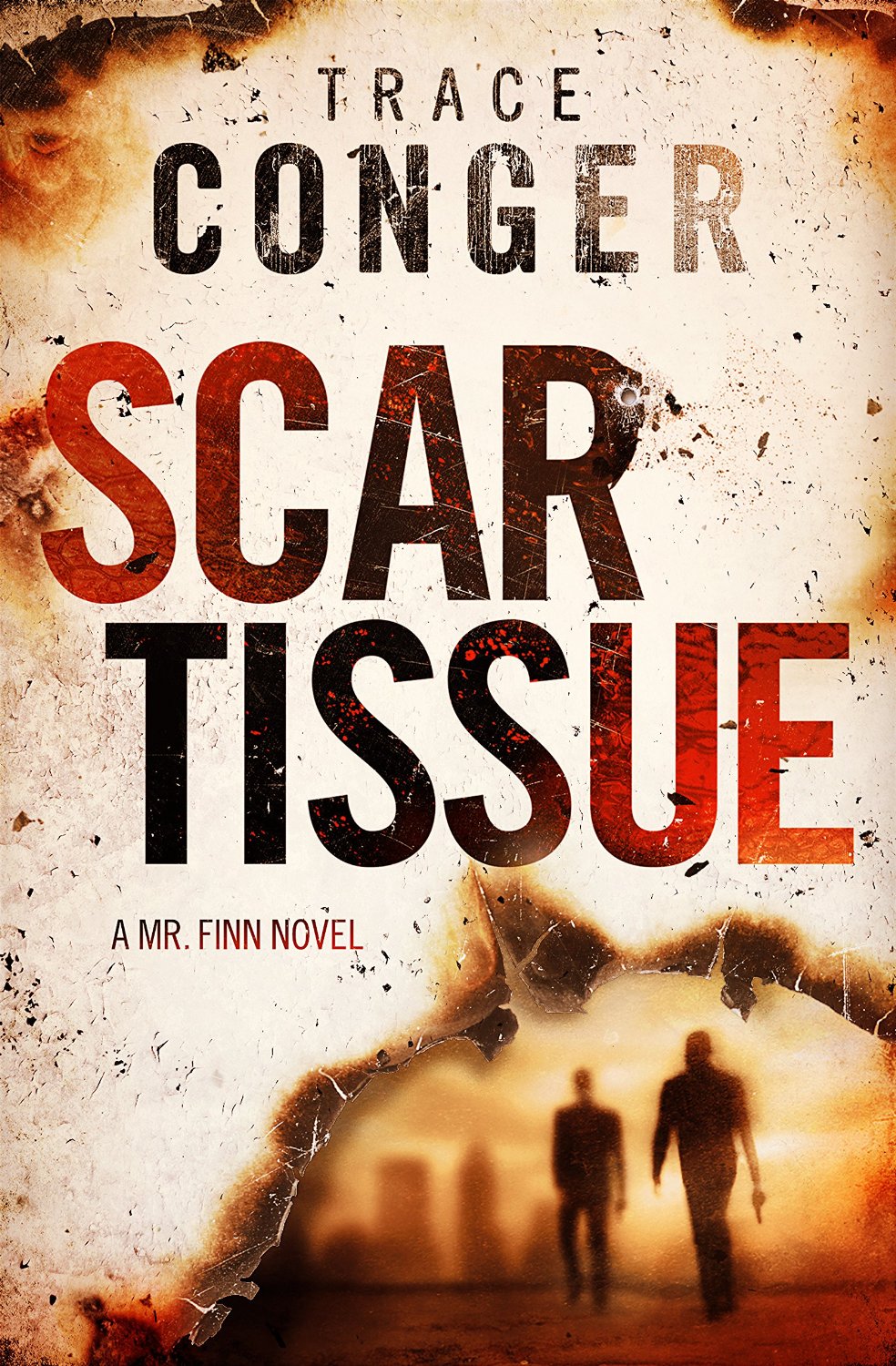 Thanks to Trace for his time and for showing us around his office!

Read the review of The Shadow Broker here...
...and stay tuned for a review of Scar Tissue, coming soon on MJMeads.com