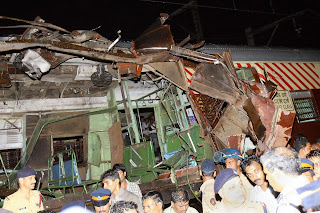 After the tragic events in Manchester last week I have decided to post the winning entry from the 2017 Short Story Competition, 'City of Gold' by Apekshita Varshney, here on the front page for all visitors to the site to read.  I hope its positive message will serve as a beacon of hope to all those affected.

Sometimes you can taste death in your mouth, and as the mouth lets it linger, you smell life. Bombay would have been a salty, sweaty whiff of hard work, courage - lost and found, and indifference had I arrived a day before or a day later. But here I was, an outsider, on the right side of luck and wrong side of history that shattered the city of steel.

We were tourists. We were seeing Bombay with an industrious discipline: popular attractions first, the rest if time permits, when I decided to disobey. I let my family lose sight of me on a crowded promenade and I sauntered to the Bombay I wanted to see. ‘When in doubt, follow the crowd,’ our guide had informed us. And I followed the advice as rigorously as people flapped their limbs in India’s most populated city. Bombay kept its promise and undulated with thumping might. Ghosts of its past stared at me through the gargoyles in Victorian buildings, Miami paid a slender visit through Art Deco architecture, glass houses reflected the squalor across the street, and a swarm of people streamlined their way through narrow lanes, from where, the sky looked like a single brushstroke of blue.

I was 13 years old and eager to eat the chilling scoop of adulthood, but like a fragment of stone in my rice, I first tasted indifference. Among people rushing to work and people already at work on the road, no one cared if you stepped on their toe or elbowed them, often they didn’t even turn to acknowledge the contact. The good men and women were insouciant, they didn’t care about an unchaperoned child on the road and pushed and shoved with purpose. I was the hidden, unimportant middle flyer in a triangle of migrating birds, interesting only for the hunters.

‘She seems new,’ I heard someone sneer. In the sea of determined footfalls, the confusion on my face would have given me away. Yet I kept walking, armed with ignorant freedom, delight, and daylight. I was told that people could fly in Bombay and I set out to see with raised hackles and heels in the wind.

I wanted to experience the rush of travel in the city, where people plant their feet to the train’s edge, let one hand clutch a spare handle, and diagonally lean out of the moving, doorless coach. Their free arm cups the wind, the gust pushes their hair backwards, and their mouths curl in a faint smile of momentary liberation.

It felt like an adult thing to do. I was hand-in-hand with raging youthful independence, scampering from my childhood and it felt right.

I wish I could tell you that I let my body dangle from the train, that I craned my neck to peer at the coaches in front, but I didn’t. I had smelled danger. When I arrived, the suburban railway station housed raucous public that could easily dim sirens. The survivors ran tearing imaginary walls to escape death and the acrid smell of burning flesh. It would later be found that on the day I strayed from my family to taste wind, seven bombs had gone off in suburban trains that killed 209 people. I could have stepped on a train, in fact, I was about to. But I survived through a random twist of timing, while others died, caught in the wrong second of destiny. In my childhood vacuousness, I thought that this was my punishment for running away. That this is what happens when children try to act like adults when adulthood is merely a mop of hair that tangles ferociously to hide its thinness.

I sat between blood and gore, surrounded by parts that would make a train, around bedsheets that became stretchers, staring blankly as mutilated bodies were sent out. It was the kind of horror that didn’t make me turn to see who was wailing, I simply began to cry with them, immersing myself in their sadness. The people in Bombay were like the drawstring of a pyjama, they kept it together, but today, the people felt vanquished, attacked and their complaints were directed equally at God and their city. Glorious cities do that to you, they make you feel invincible while silently planning your murder. But that day, even as clouds descended in my eyes, I didn’t see a single murderer of humanity, only saviours with bloodstained clothes in the city of steel.

My mother slapped me four times before embracing me and crying the tears she had possibly reserved for my wedding.

‘Don’t do this again,’ my father said, his eyes partly wet and partly furious.

Later in a college lecture, a teacher would ask us to remember a moment that changed our life, a solitary incident that worked like a tunnel of transformation, and my classmates would write stories about dead parents, financial crisis, unrequited love, but no one, despite having lived in Bombay all their life, had witnessed an act of terrorism like I did on my third day in the city.  I often wondered which lesson lurked in the callousness.

My mother called it an act of God and when we reprimanded her for her insensitivity, she would frown and bemoan, ‘It taught us a lesson. A lesson to never expect anything better from this place.’ She thought her mantra would help when my father decided to take up a job in Bombay and we had to move to a city that may not have taken anything from us, but had given us many sleepless nights.

Days passed and as the city embroiled in big-city normalcy, we learnt to push and shove with purpose. When Bombay’s monsoon arrived, I saw my mother forgive the city for almost killing her daughter. But while my parents and I tottered with umbrellas bigger than our bodies and jumped over puddles in an unsuccessful attempt to stay dry, my younger brother started to run unabashed. I realised that it was his moment to taste adulthood, my parents didn’t. They stopped him from stepping out, getting soaked, or playing football in drenched grass when the clouds were getting rid of their greyness.

I returned home one afternoon on a particularly wet day and saw my mother’s wearied face, in that instant, I knew that it was because of my brother. I knew he was in danger much like I had been. Bombay had experienced a 24-hour rainfall of over 37 inches and the nearby river was beginning to flood. The news anchor told us about a potential cloud burst before the blackout cut her rudely. Our phones lost network soon after. We became desperate in our search for my brother.

We created search parties with neighbours and formed a human chain to withstand the pressure of the flooded water. We were constantly shouting his name and frantically asking people if they had seen him. After four hours, we saw him lying unconscious over a half-submerged water tank. We rushed him to the hospital where his soaked lungs kept him for a month. When he opened his eyes for the first time in a week, I knew that he had walked into adulthood. My father’s eyes were half-wet, half-ferocious, my mother was stuck with the grief that dried up her tears. I smiled at him on behalf of my family and he looked at me with eyes that were as warm as the first sunshine after a relentless rainfall. My brother and I were never close, but that day, we were tied by a thread as sanctimonious as the understanding of rebirth.

Two years later my brother would tell me, ‘We’ve not been adventurous for far too long, sis’. I would hit him good-naturedly and try to refute him but deep in my heart, I knew that our adventurist tendencies were reduced to faint whispers. Therefore, on my 21st birthday, when my brother blindfolded me and pushed me into a car, I meekly gave in.

‘Where are you taking me?’ I asked.

As he got me out of the car, my heart thundered like a bird trying to escape coarse fingers. We were at a railway station. I could hear the persistent announcements, the siren of a train, and the peculiar sound of wheels rubbing a metal track. When he opened my blindfold, I let out a stream of tears. ‘I can’t do this,’ I pleaded. ‘You can,’ my brother promised. He took me by the arm and we boarded an empty train. The air had a faint whiff of sweat that Bombay’s humidity carried but my nose still smelled the burning flesh. The train was almost empty, but I could see people running for life.

‘You have to forget the past,’ he said, calmly, assuredly. ‘You have buried your dream for far too long,’ and with those words he held my palm and took me to the train’s footboard. He caught the train’s pole and allowed his head to peek out of the coach as the wind caressed him gently. I merely imitated him but in that moment, as the wind passed through my hair and squished my cheeks, I felt an unfamiliar wetness on my face, I looked up to see the season’s first drops of rain.

Two people forgot the past that day and embraced the city as their home.