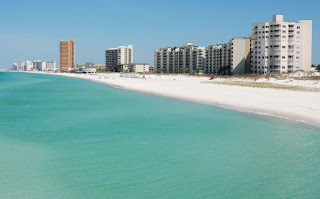 Since starting this site I've been transported from the snow-laden highways of New Foundland, Canada to the tropical beaches of the Caribbean, from the bustling metropolis of Singapore to the quiet countryside cottages of Norfolk. Ok so that last one was mine, but still, you get the idea. As in property buying, location plays an important role in a novel. So how do you pick the best location for your story?

Consider sticking to a location you know well, it doesn't have to be where you live right now, in fact a memory of growing up somewhere can be a powerful descriptive tool. It could also be a holiday destination you fell in love with, or a dreary office commute. The reason for picking a location you're familiar with isn't just because it adds a sense of realism, but you're likely to be better at describing the mood, character and local people of the place.

It's also worth considering how you want your location to affect your novel. Perhaps the location adds to the general feel of the story, or perhaps it flies in the face of it. Juxtaposing a romantic tale with a dirty, heaving slum works as well as setting it in a traditionally romantic beachside location. Similarly a murder in a quiet rural idyl can have a more dramatic effect than one in a busy city. In the latter's case it will also affect how such a murder is investigated and what resources can be called upon.

Unless you're writing an ultra-realistic novel it doesn't matter if you use your creative license to make locations closer together than they really are, nor does it matter if you make up which shops or hotels are where. As long as the general ambience of a location is preserved, big city coffee shops all look roughly the same, but a giant airy glass-walled coffee shop in a small boondocks town will feel out of place.

You may have considered one particular location for your novel, but it's always worth considering others, especially if they would add a dramatic effect to the story, either through juxtaposition or mirroring. Think of your locations as passive characters, as they're often equally important, without interacting formally with your other characters.

Of course this also enables you to create entirely fictitious locations for your novel, regardless of genre. Don't be afraid to be bold, take the best bits from various cities you've visited to create one that enables your characters and story to flourish in their environment. A well crafted location or set of locations can help to drive a novel, add to character development and provide escapism to your readers.