Blog - A Study in Pink and Orange 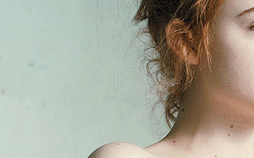 Ginger hair, flowing, tousled, unkempt, fiery, free – the sunlight changing it from deep orange to lighter wispy yellow tones. She flicks it back out of her eyes but it won't be tamed and covers her vision as quickly as it left. Her pale complexion, her natural unblemished skin, untainted by sunlight or the colour of make-up, her eyelids almost dusty pink and translucent, like an image of an unborn baby, delicate, fragile, pure, yet to discover sin or cruelty.

There she sits in a floral print dress and knee high boots that match neither each other or herself. The boots a stark leathery contrast to her soft supple skin. She holds a pen masterfully, it seems to move of its own accord, the words forming on the paper before they have a chance to form in her mind.

A strong burst of light helps to silhouette her profile, hair covers almost all of her face, yet occasional outlines of features draw him in further. A soft, sloping nose, a pair of thin, pursed lips, almost indistinguishable from the rest of her face to all but the most careful of students, of which he was one. She puts the end of the pen to her mouth, it dare not enter but instead teases the parting of her lips while she studies her notebook. As it moves away a tongue protrudes for a split second to wet the area dried by the trailing of the pen.

Her feet, size five he guessed, are bolt upright on the other side of the sofa, her socked toes pointed forward slightly to gain comfort by resting on the arm of the chair. Her legs, milky yet mottled, red in patches where she has scratched, leant, or rested her hands. This burgundy hue at once breaks up the beautiful alabaster tone, but like the flourish of colour on a modern art masterpiece it simultaneously draws the eye and makes the blood course through his veins.

She stares at the end of her hair and plays with it briefly between her fingertips, focusing so intently on it that it's clear her mind is anywhere but here. The tedium of it, the stillness, the quietness and the solitude, all at once come crashing into view.

She clutches her bag which has remained hung around her neck and shoulder at all times. The chain strap plays the role of a piece of chunky gold jewellery, which has no place on such a slight frame. It chokes her, trivialises her, makes her common, or everyday, none of which could be said of a girl like this.

Her skirt rides up as she sits, allowing him glimpses of her upper thigh, her legs are shapeless, as those of girls of her age are, like two identical struts of marble, barely tapered at one end and providing a pleasingly symmetrical podium for what lay atop.

He sat. He waited. He waited and he waited for a glimpse of something more. The waiting would have been painful had it not been so erotically charged.  For what is waiting except the price we pay for the beautiful result. A trade-off that in its own morbidity only serves to make the approaching benefit all the more sweet.

He could on this occasion, however, wait no longer. Time itself had not only stopped for him, but seemed no longer to exist. Nothing existed. Only her. Only her and that sofa. Only her, the sofa and the window, and then again, only her.


* * * * *
Her pale supple breasts, small yet perfectly formed, her nipples firm and crimson, with dark pinkish hues around them, like a perfect tricolore of pastel flesh tones.

She wears a necklace of hard metal, which hangs between her breasts and rests on her sternum, looking both clinical and machine made, unnatural in contrast to her natural beauty.  Her skin marked by the straps of her bra, tracing deep parallel lines across her back, breaking up her body into sections which seem to beckon him to study them in turn.

Her legs, folded one over the other, her leopard-print briefs breaking up the seemingly endless stream of skin between back and thighs.  Her toes are thick and short, the soles of her feet faintly paler than the tops, taking on an almost ethereal quality. She stares downwards, looking solemn, the light reflecting off her hair as she does so, casting new shades of yellow and orange across her chest.

He's seen a veritable rainbow of every conceivable colour, from pinks to reds, oranges to yellows, at least they were all the colours he could conceive now, all the colours he would ever want to see again.  She glistens even more now, the tones in her skin shifting as the sun plots its course across the sky behind her.  At its palest her skin is almost pure white, at its darkest the lightest imaginable pink, a bare canvas on which the colour of her hair and eyes play.

He could study this artwork for the rest of his days, but she has other dark places and other fortunate people to illuminate with her presence. As quickly as she arrived she is gone. Now he sits in darkness, perhaps destined to be in darkness forever more.
Posted by MJMeads at 08:00
Email ThisBlogThis!Share to TwitterShare to Facebook
Labels: Blog, Excerpt, Nude, Study